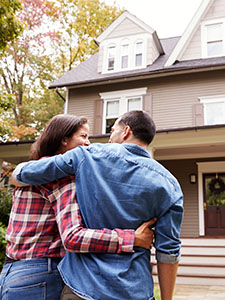 The housing market sentiment index dropped by 3 points in January, falling to a level of 83. Though the reading still remains historically strong, January marks the second month of declines for the index. Several factors contributed to the decline. “A shortage of buildable lots is making it difficult to meet strong demand and rising material prices are far outpacing increases in home prices, which in turn is harming housing affordability,” Robert Dietz, chief economist for the NAHB, said in the report. The rising COVID-19 cases are an additional concern. Overall, demand for new homes is still high, interest rates are still low, and builder sentiment is likely to remain strong.

Existing home sales jumped 0.7% in December, to reach a seasonally adjusted annual rate of 6.76 million. Year-over-year, sales were up 22.2%. "Home sales rose in December, and for 2020 as a whole, we saw sales perform at their highest levels since 2006, despite the pandemic," said Lawrence Yun, NAR's chief economist. "What's even better is that this momentum is likely to carry into the new year, with more buyers expected to enter the market."

With home buyer demand still strong, housing construction has continued to increase. As more homes become available in the market, prices will likely fall. Prepare to put in the best offer on your dream home as soon as possible by getting preapproved first. To get started, contact us today!